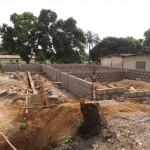 Over Christmas, we are pleased to say that residents from Olney were finally able to visit their friends in Newton again (Ebola has meant no flights for over a year).  The Preschool is well underway, despite a few teething problems, and the walls are now approximately 4ft high.  Due to a need for finances (see below), building is currently at a halt, and the ONL is discussing whether it can help. A water well is also needed to serve both the Skills Training Centre and the Preschool.  A borehole has been started but needs more work.

Sadly the Preschool has been set by difficulties, partly due to the very intense rainy season (see ‘Flooding’ in the News section).  However, the Preschool has also been impacted by a common West African problem – land disputes.  Land disputes are a real problem in Sierra Leone as there are virtually no written records of who owns what. This is mainly due to title deeds being destroyed by rebels during the Civil War.  Similar problems happen in the UK, although thankfully less frequently – it’s known as ‘acquiring ownership by adverse possession’. The Olney Newton Link Committee in Newton believed that they had bought a piece of land the size of ‘3 town lots’ for the Preschool and started to build.  Then sadly someone laid claim to the land and won the case.  Consequently everything has had to move!  The Committee is now using the land next to the Skills Training Centre – land definitely in their ownership but which had previously been earmarked for the expansion of the Centre.  They have ensured that the foundations and walls are strong enough so that, if necessary, they can extend upwards.

The Skills Training Centre, with building work next door

Both time and building materials have suffered.  However, it is hoped that with support from the Olney Newton Link, and with the precious dry spell of weather underway, the situation can be quickly recovered.